From http://www.atsf.co.uk/ilight/tech/noctovision.html
Infrared Photography Andy Finney
Just for reference Baird became a commited Spiritualist and friend of people like Sir Oliver Lodge. Other records seem to indicate that the potential to use this system on Physical Seances was very much considered. (I would love to give better details on thsi but have only discovered several fragments)

Over 75 years ago he also demonstrated the use of infrared light as illumination for television and came up with a device he called a Noctovisor. Alexander Russell, writing in the February 5 1927 edition of Nature, described how he and WR Crookes were shown Noctovision in action at Baird's laboratory in London on December 23rd 1926.

One of us stayed in the sending room with a laboratory assistant in apparently complete darkness. In the receiving room, on another floor [of the building], the image of the assistant's head, and all the motions he made, could be readily followed.

Russell goes on to describe the images as 'not so clearly defined as when visible rays were used, but we easily recognised the figures we saw, and made out their action'.

Baird had tried ultraviolet light as a means of shooting in darkness, but he found that this was damaging to the subject's eyes. His first experiments with infrared used electric fires and on one occasion a dummy actually burst into flames! His successful infrared source was an ordinary light bulb coated with ebonite to block visible radiation. 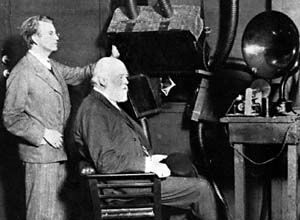 The distinguished scientist Sir Oliver Lodge (the first man to send a signal using radio) was successfully Noctovised at a meeting of the British Association held in Leeds in 1927. Baird wrote ...

He came with his daughter and said it was 'amazing, but very hot.' I thought this was a pity, as he was the best subject for television I have ever seen, his white beard and impressive head coming through marvellously well.

It is said that the demonstration of this equipment in Leeds was so exciting that mounted police had to be called in to regulate the queues of people wanting to see it. [NB: The occasion of the Lodge demonstration was at Baird's Frith Street studio in London according to Moseley's biography of Baird. Since Moseley put it in Leeds in Television Today and Tomorrow this is a little confusing.] On another occasion, the then Prime Minister, Ramsey MacDonald, saw Noctovision and, according to Moseley, 'found it difficult to believe'.

By 1929, Baird had refined the system sufficiently for a demonstration of a self-contained infrared viewer on Box Hill in Surrey on August 9th. The device (or one similar) is shown in the photograph below. A simulated fog made by viewing through a thin piece of ebonite (which is opaque to visible light) was used and the Noctovisor clearly showed lights which were invisible to the unaided eye. 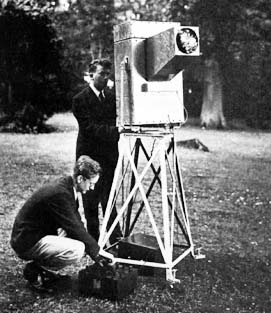 Baird (standing) and assistant with the Noctovisor

The authors of the description of Baird's demonstration on Box Hill, written up in a 1931 book called Television: Today and Tomorrow, were clearly excited by the naval and military possibilities. They wanted this infrared technology to provide a capability for night and fog-bound vision that was, in reality, only achieved by RADAR during World War II. Whether the Noctovisor was what we would now call a Night Vision Scope using near infrared or a Thermal Imager using far infrared is unclear in the book. However, I believe it is likely that the device was a night scope.

If this was the case then the Noctovisor would not have seen through fog as Baird intended. Infrared will penetrate haze but as the size of the particles in the air gets larger and it becomes fog, infrared can no longer penetrate.

According to Michael Ritchie in his book on early TV ('Please Stand By' - see below) there was an incident at the BBC during tests with the Baird system ...

In 1933 the BBC broadcast an infrared-ray technique that 'stripped' cotton dresses off a line of dancing girls. The press teased the broadcasters about this unintended nudity. 'Scientific progress took an unforseen turn today' wrote the London News Chronicle.

The high light levels needed by the cameras and the high infrared output of those lights (they were incandescent) also may have caused a similar incident involving a gymnast in the Soviet Union in 1938. This will no doubt bring to mind the interest shown in this aspect of infrared when Sony introduced its 'Night Shot' camcorders. The company fixed the cameras so that infrared could only work in low light levels - much to the annoyance of the 'legitimate' infrared community.

Baird's television system used a rotating mechanical disc with holes in it arranged to scan the light from a brightly-lit scene so that was 'seen' by a photo-electric cell. The 30 scan lines were vertical (this apparently looking better than a horizontal scan) and the picture was refreshed 12.5 times a second. The receiver (or monitor) had a lamp behind the scanning disc but otherwise the process just worked in reverse. An experimental broadcasting service using the London station of the BBC (call-sign 2LO) was inaugurated on September 30th 1929.

Unlike his rivals in the USA, Baird successfully synchronised the transmitted and received scans to achieve a stable picture without the motors at both ends being powered by the same synchronised AC power source. Unfortunately he was also wedded to mechanical scanning and eventually his system was replaced by the electronic, cathode-ray-based television we still make use of today.

Footnote:
There is an ongoing friendly battle between the television and computer-led factions over the development of digital television, particularly over whether the future of television should be interlaced, as it is now, or progressive like computer screens. A representative of Microsoft described their approach to the assembled TV engineers at the 1997 IBC conference in Amsterdam. As part of the presentation, Microsoft showed their 240-line progressive scan suggestion for a possible future format. It was possible that neither the presenter, nor most of his audience, were aware that in 1936 John Logie Baird was advocating such a standard for broadcast TV in the UK.

Sydney Moseley was Baird's business manager and a tireless enthusiast for his work.

Detailed information on the early development of television, especially in England, can be found in the following book, which is still in print:

The book is expensive at 65 pounds and was in dire need of being proof-read as it is full of typos, but the information on the technical and political background to the development of television is matchless. There is coverage of the work done in the USA, Germany, France and elsewhere as well as the UK.
ISBN is 0-86341-079-0
Ref: Please Stand By - A Pre-History of Television: Michael Ritchie
The Overlook Press, Woodstock 1994

Michael Ritchie's book, refreshingly, gives an American slant on the whole business of early TV and is written in a style that is easy to read while still being authoritative. He includes the story of Philo Farnsworth, the first man to make electronic TV work (and featured, with his invention, as a character in the best-selling thriller novel 'Carter Beats the Devil' by Glen David Gold). Although taking a programming viewpoint the book places this clearly in the context of the competitive relationship between the various elements of media big business in the US as it affected TV. How unlike the homelife of our own dear BBC!