The following is a good unbiased article on the work of William Mummler. It comes from the following site about early "Memento Mori" Post Mortem Photographs http://vv.arts.ucla.edu/terminals/meinwald/meinwald1.html
For Interest the type of image they began to make for this shows one reason why Spirit Photography found it hard to be accepted. 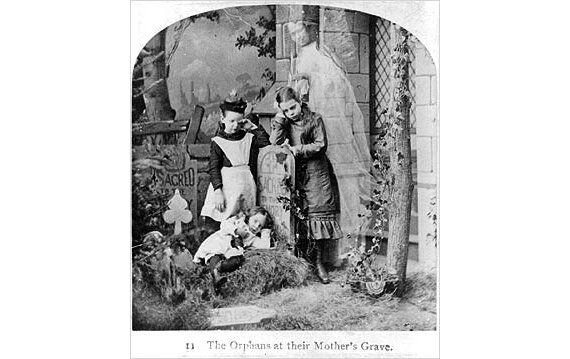 Photography became another form of evidence for Spiritualists. In 1861, when William Mumler, an engraver for a Boston jewelry firm, announced that he had not only made a successful photograph of a spirit, but had been able to obtain repeatable results. He went into business as a spirit photographer, providing pictures for ten dollars apiece at a time when a normal portrait photograph could be obtained for a few cents. The procedure was not substantially different from a normal portrait sitting. The person desiring a photograph of a deceased friend or relative would simply pose as if for their own picture. The spirit "extra," as it was called, did not appear in the studio, but in the negative and the subsequent print.85
Response to Mumler's announcement in the Spiritualist press is typified by this quote from an 1863 editorial:
If [spirits] can appear and throw their image upon a glass, so as to be visible to us, the whole question of impossibility falls, for the photographer's art is merely the preserving of such an image when once thrown upon his camera or plate.
Photographers nevertheless tended to be skeptical, as indicated by this editorial in the American Journal of Photography:
How wonderful is the recent progress of our art! We now in the usual way go through the process of having our picture taken, but when the finished photograph is presented, lo! beside our lovely image is the attendant spirit, a babe, or a grandfather, or an unknown!... spirit photographs show, that the spirits dress in clothes of earthly fashion, that they sit in chairs, and that in sitting for their pictures they put on the smirks which some have supposed peculiar to mortals.
By 1869, Mumler had moved to New York City, where he was promptly arrested and charged with public fraud, larceny, and obtaining money under false pretenses. The arguments of the defense and prosecuting attorneys during the highly-publicized trial correspond precisely to the opposing sides of the argument over spirit photography itself. Mumler's defense attorney argued that Mumler used ordinary photographic methods, and that his success in obtaining spirit figures was not subject to his control. He also stressed that Mumler's procedures had been scrutinized and no evidence of deception found, and that many customers had recognized the features of departed loved ones in his pictures, even in cases in which no likenesses of these persons existed. The fact that many of the spirit "extras" in Mumler's photographs had been identified was the central feature of the defense attorney's argument. How, he asked, could identifiable spirit portraits be produced by fraudulent means?
The prosecutor offered a simple explanation. He suggested that the vagueness of the spirit forms in Mumler's photographs left most of the matter of identification to the imagination, and that the sitters credulously imagined that they saw what they wished to see. In his words:
Those who went to [Mumler] prepared to believe, of course did believe on very slight proof.... that is all this evidence [of recognition] proves. It proves the existence of a belief in the prisoner's statements, not the truth of those statements."89 (Emphasis in original.)
Though the prosecutor was certainly correct in this assessment, the argument can be made to work both ways. The Spiritualists, who wanted to believe Mumler, looked only at the evidence that supported their belief. The skeptics, on the other hand, did not want to believe Mumler, and did precisely the same thing. Since the two beliefs were diametrically opposed, it was impossible for either side to convince the other. The veracity of photography was never at issue. Both sides believed implicitly that photographs could not lie, and both arguments in fact depended upon that presumption.
The real conflict, therefore, was between a belief system that included the existence of spirits and one that did not. The ideological nature of the conflict was made explicit by the prosecutor, who attacked Spiritualism on religious grounds. Spiritualism, he passionately asserted, was "antagonistic to the Christian religion." Though the weight of public opinion was clearly on the prosecutor's side, neither attorney proved his case, and the judge dismissed the charges for lack of evidence.

The Issue certainly made major news as the publication of the front and back pages of Harpers weekly shows.

The cartoon on the back shows a man being photographed with his girlfriend and then "Oh Horror" his picture shows him surrounded with his dead wives. 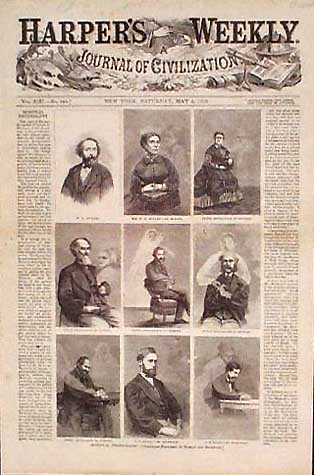 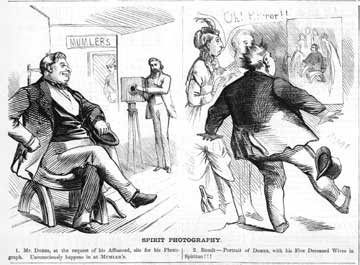 This is an interesting article with a slideshow of pictures
http://www.examiner.com/x-8960-Nashville-Ghosts--Hauntings-Examiner~y2009m9d1-Spirit-photography-and-William-Mumler