Observational or empirical investigation was the common method at séances or a variety of the type of controls used by the Rochester Committees. Other investigators were, however, not happy to accept mere observation and examination. To them proof meant investigating the claims by applying scientific methodology. The famous scientist Michael Faraday wrote to The Times of London, June 30, 1853 about one of the first experiments in which he tested table tipping.

He fashioned a table with two tops that were divided by a layer of ball bearings and sturdy rubber bands. When sitters worked with his device, the upper table top moved first, he therefore deduced that the fingers were moving the table and not some external intervention either by Spirits or the universal energy force then known as the Odilic Force. Faraday concluded, however, that the sitters were not frauds but used "unconscious muscular action".

In America the well known scientist and inventor Professor Robert Hare wrote a letter to the Philadelphia papers on July 27, 1853. In it he expressed agreement with Faradays findings because he “was at that time utterly incredulous of any cause of the phenomena excepting unconscious muscular action on the part of the persons with whom the phenomena were associated.” (The Experimental Investigation of the Spirit Manifestation, 1855).

In response to his letter two Spiritualists’, Dr. Comstock & A. Holcombe, challenged Hare’s views and suggested he attend a séance. Accepting the challenge, Hare embarked on a course that was to convince him of the reality of Spirit Communication and to convert him to Spiritualism.

Following his initial contact Hare set about devising a series of experiments to test mediums, using apparatus that was either his unique creation or which he adapted. Hare called all of his equipment Spiritoscopes. They were constructed in a way to allow the provision of complex responses from the spirit world in a strictly controlled way. His intent was to satisfy himself that the communications being received by mediums could only be as a result of the work of spiritual intelligence.

First he adapted the “Spiritual Telegraph Dial” of Isaac T Pease (Pease was a committed spiritualist and travelling agent for the new publication “The Spiritual Telegraph”). This created a larger machine separating the Medium from the dial by a plate which obstructed any view of the communication. The machine operated from movements caused by table tipping spinning the dial through a set up of pulleys and weights


Robert Hare then further adapted Pease’s apparatus to create a new device which was more mobile while enhancing the controls.

This machine incorporated a vibrating lever removing the mediums conscious ability to control the communication. Operating under test conditions the dial was turned to face away from the medium. Hare believed this ensured any intelligent communication that took place could only be coming through the intervention of the spirit world. He refined this model further to allow mass production.

Hare continued to add to his collection of Spiritoscopes with a new machine.

This was a six foot long table, and the movement of the dial was achieved by the medium activating a plate on two balls but their action only controlled the movement of one side of the table. The table moved the string on the castors making the disk rotate to form messages. In this case the medium could see the letters but not control the dial.

Even then Hare was not done and he designed a machine to illustrate the potential for spirit to apply physical force.

The medium was prevented from any contact with the apparatus because their hands are placed in a cage above a vase of water. Despite the inability of the medium to interfere with the machinery spirit showed their power with a force equivalent to 18lb consistently applied on request.

Hare used his many apparatus in test situations with a variety of well known mediums. He did this in front of reliable witnesses and became entirely convinced that he could prove that Spirit was communicating. His 1855 book was a triumph of early research, which many felt proved conclusively the veracity of communication with Spirit.

Apart from his scientific testing the book includes narrative about experiences in other countries and his personal research by visiting mediums to examine their work. Hare met most of the well known mediums of the day including the Foxes. In particular he worked closely with Mrs Maria Hayden, who introduced Spiritualism to the UK, both in attending her séances and with his machinery.

Although many scientists and skeptics rejected his findings, his work created greater acceptance for Spiritualism.

Robert Hare passed away in May 1858 and the New York Times of May 10th 1858 carried his death notice. Sadly as one may expect it carried the following lines “Many of the most valuable discoveries of the century are due to his research and ability…until an unfortunate moment he became a convert to the doctrine of Spiritualism, a delusion which of late years expelled from his mind nearly every other subject”. It is sad that whilst science gladly embraced his early research they rejected his equally detailed research on “Spiritual Manifestations”

Hare was the first of the serious researchers to be converted as a result of their scientific investigations. His publication encouraged those of a scientific mind to pursue objective evidence. A whole new field of enquiry began to appear which ultimately led to the formation of the Society for Psychical Research (SPR) in 1882. However, the earlier research of committed Spiritualists led the way to this; scientists like Charles Varley and Sir William Crookes caused scandal by presenting papers to the Royal Society which linked science and Spiritualism.

Spiritualism is defined as a Religion, a Philosophy, a Truth and a Science, we sometimes forget the concept of Spiritualism as a Science but in the early days it clearly merited that description. Indeed Spiritualists continued their own research over many years, seeking to prove their claims of survival and the truth that it brings to the world. Sadly we have now come to rely on the work of outside research organizations and of the SPR. Who knows, one day the spirit of Robert Hare may re imbue the movement with its own desire to drive research and validate our claims to the world.

I managed to get an e-book version of Experimental Investigations of the Spirit Manifestations which he wrote in 1855 some time ago.

In it there are plates of the apparatus like this. 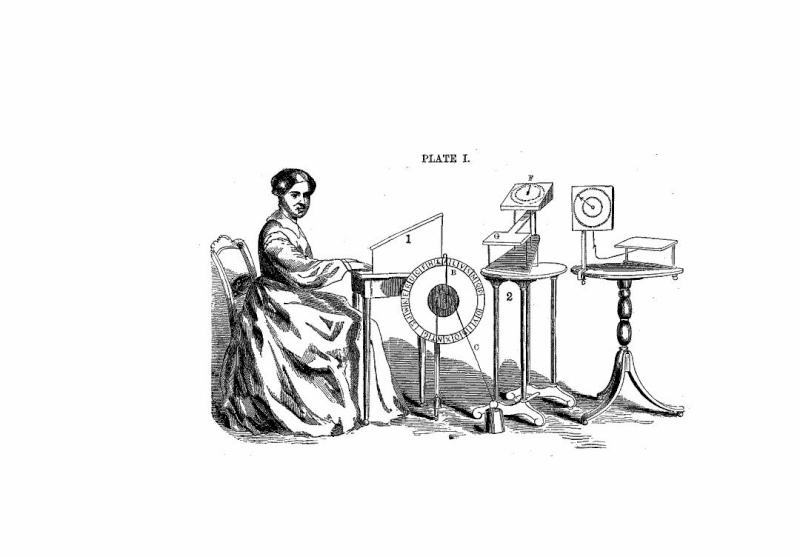 I will try and copy all 4 plates and see whether I can get the descriptions up as well. 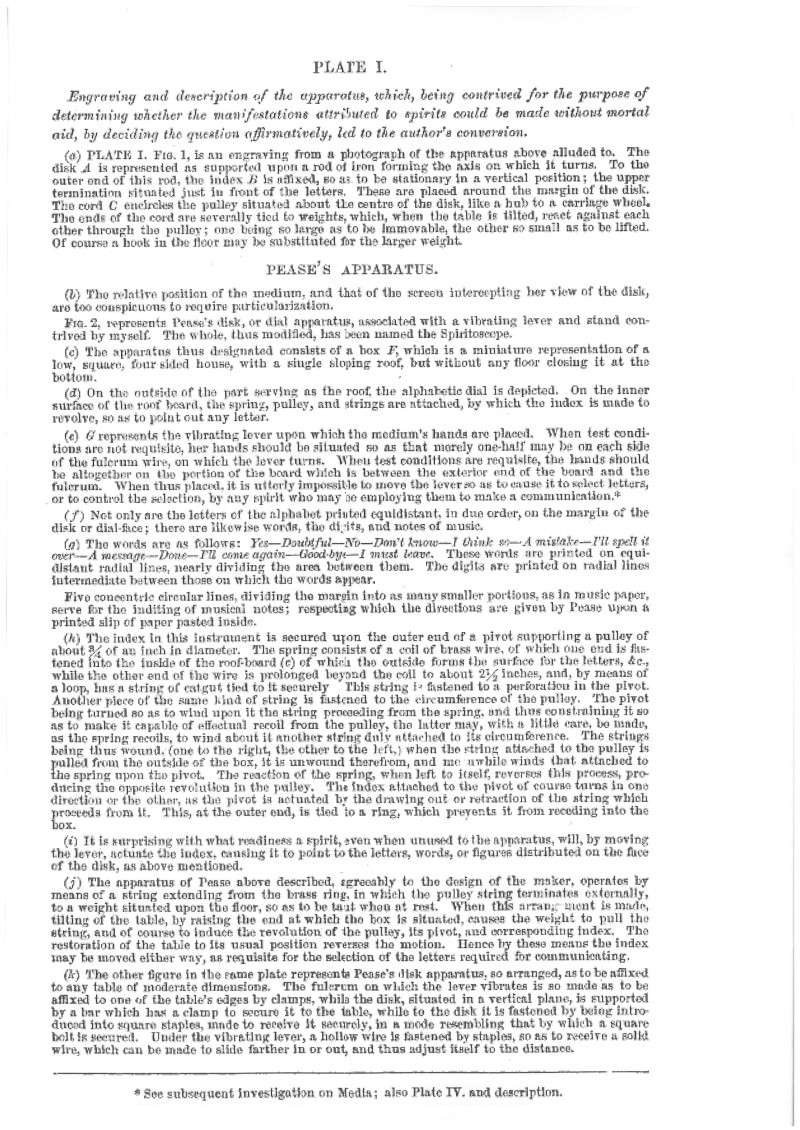 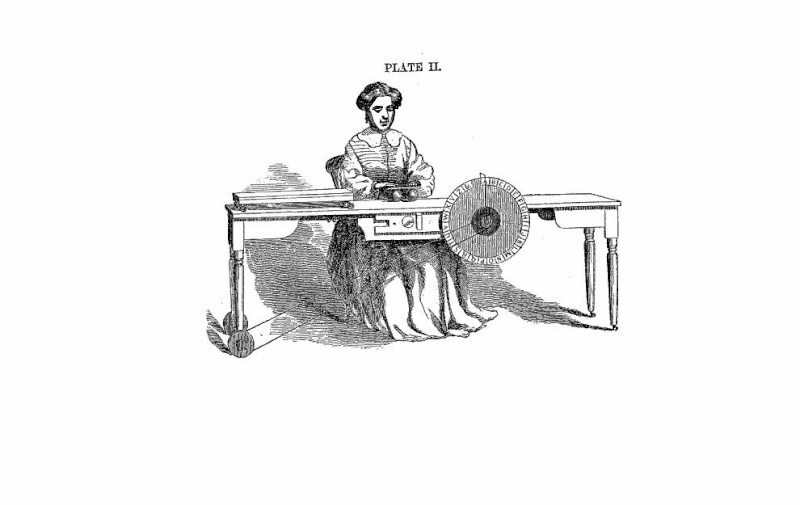 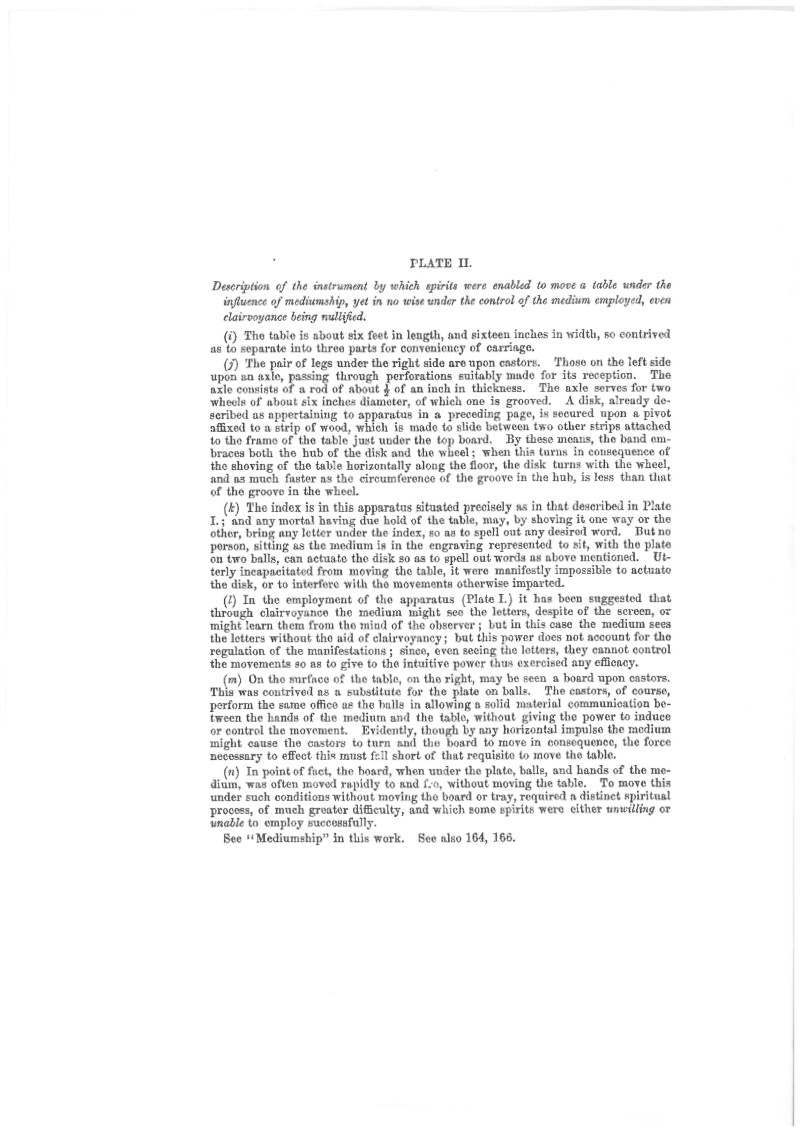 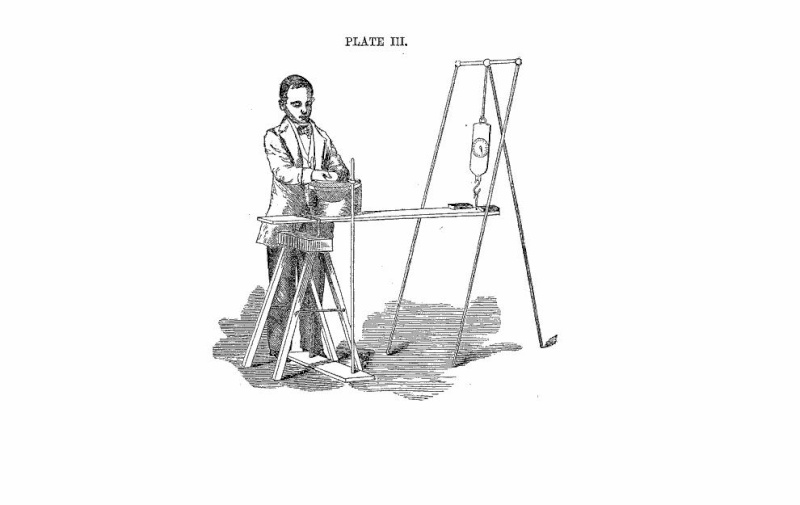 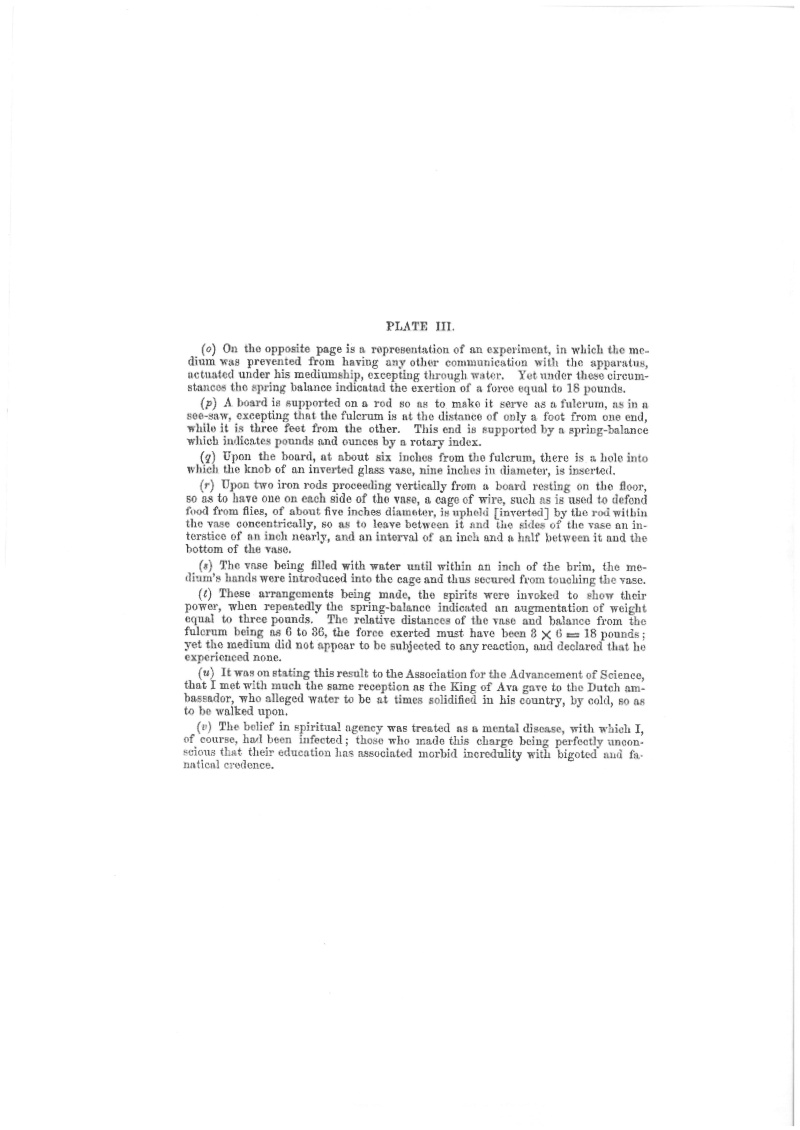 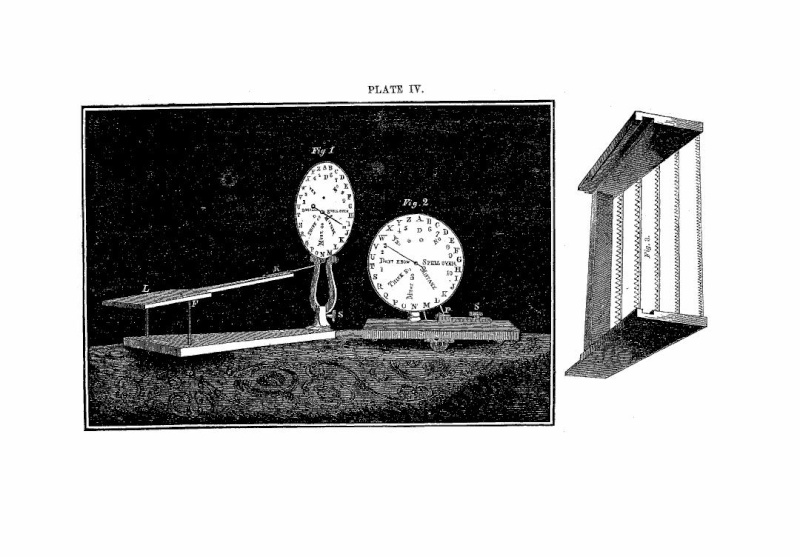 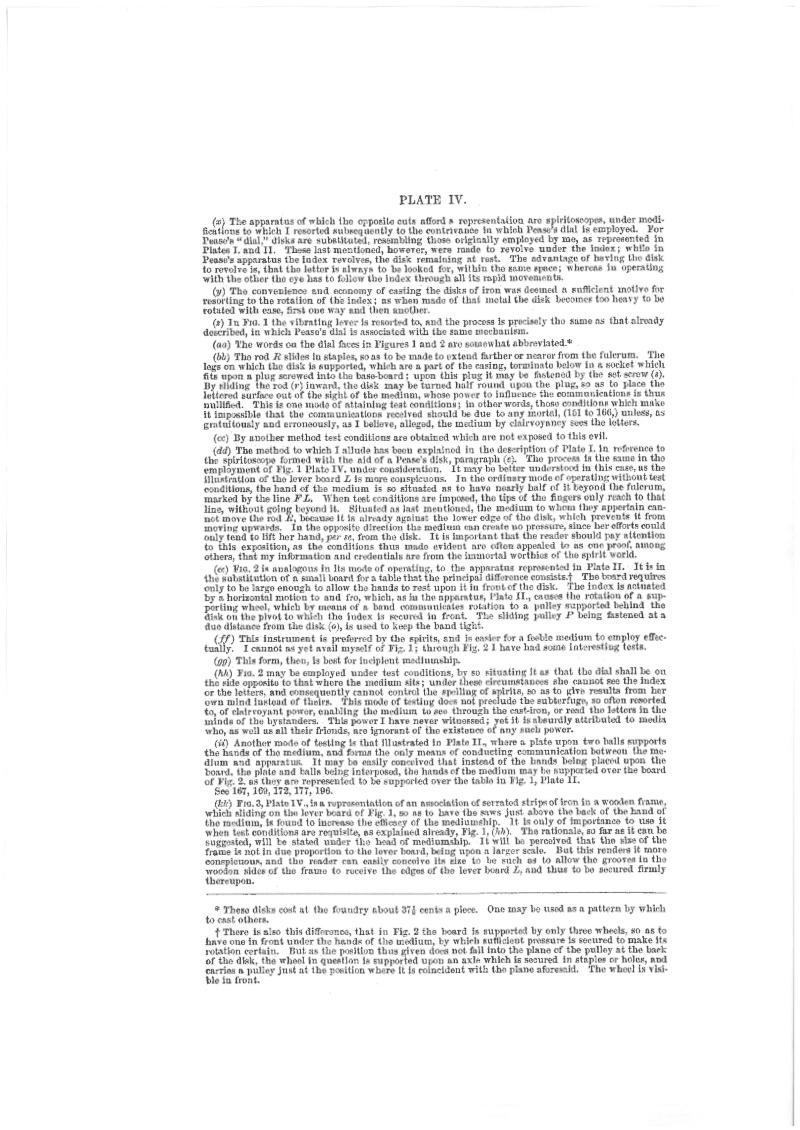 Hope you all enjoyed that, I believe this is the first detailed book on serious psychic research just 7 years after the rappings at Hydesville. Thanks for the post Z. 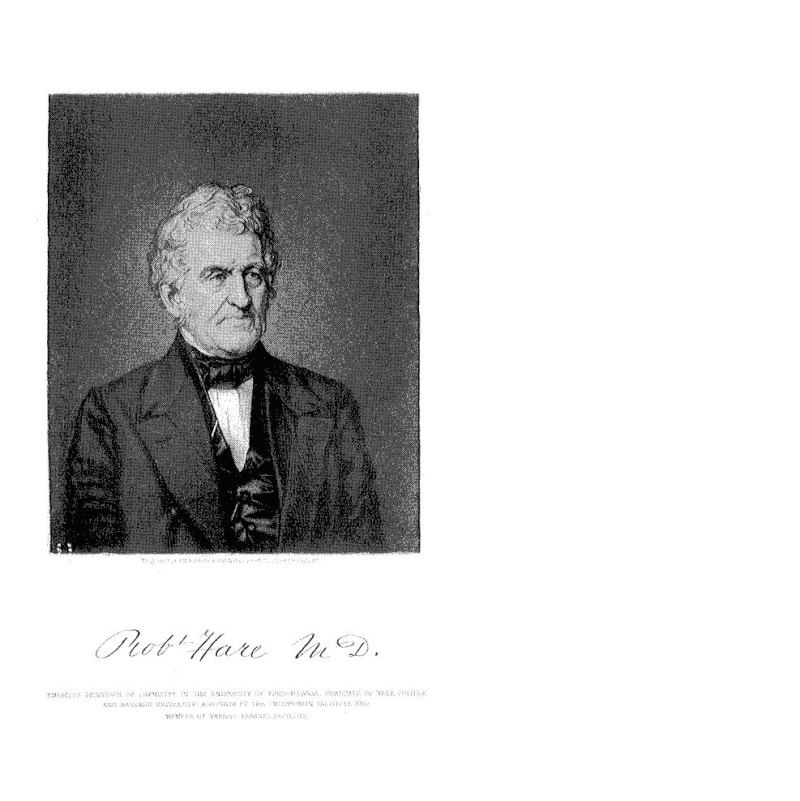 Hi Z and Jim.
Very interesting posts.
Z, as far as not knowing how to put pictures in the posts is concerned, I can only say JOIN THE CLUB. lol

In the picture Plate 1 above number 1 is apparently Isaac Pease's original machine about which there was the following notice. Again this was unique as it seperated for the first time teh Meddium from the message. It was from this basic design thet Hare designed all of his which he called in total Spiritoscopes.


I. T. Pease of Thompsonville (Conn.) has succeeded in inventing a machine which he denominates the Spiritual Telegraph Dial. This apparatus is contrived with a dial face on which are marked the letters of the alphabet, the Arabic numerals, the words Yes and No, and some other convenient signs. A moveable hand, or pointer, is fixed in the center, and when a ghost wants to communicate with its pupils and friends in the body, all that is requisite is for it to give a gentle twitch to the pointer, and the revelation is accomplished. Some Yankee ought next to invent a visible ghost and take out a patent. 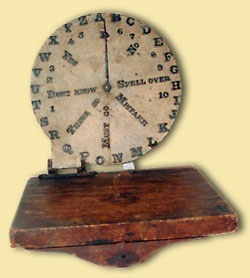