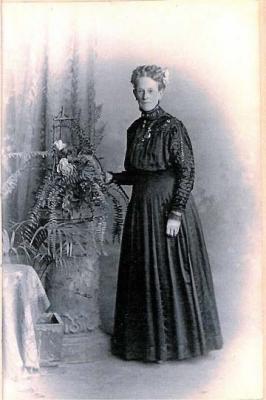 Last week, we recalled two seemingly unrelated events, both of which occurred right here in upstate New York circa 1850. Willard and Jane Downer became the namesakes of the street that still bears their name in Baldwinsville, while less than 50 miles away the Fox sisters founded the spiritualism movement in Hydesville. Although my religious convictions prevent me from subscribing to spiritualism, adherents believe that spirits of the dead can communicate with the living from the afterlife. All one requires is a medium or someone to “channel” these messages. But sometimes, as Marshall McLuhan once wrote, “the medium is the message.”

Carrie Downer, born the youngest of four on April 18, 1854, marched to the beat of a different drummer. According to one local paper, Carrie became “a spiritualist or trance speaker while recovering from a severe illness, and that, we understand, against her own wishes and that of her parents, the influence coming upon her unsought.” While the exact nature of Carrie’s ailment is unknown, it launched the very spiritual calling and career that estranged her from her beloved oldest brother, W.W. Downer, partner in the prominent family firm, W.H. Downer & Son.

Our first inkling of Carrie’s eccentricities is her brother’s harsh letter “To the Public” in the Baldwinsville Gazette on Oct. 28, 1880. He wrote to “disclaim all connection and sympathy with one Carrie E. Downer, a so-called Spiritual Medium. As to the merits of the business, religion, amusement, game or whatever it is called in which she is engaged, I have nothing to say….I should be pleased to have the woman above named say she had already disowned me, or had never considered herself in any way related (should like to have it done without her going into a trance, if possible). Such an avowal from her could not but advance me in the estimation of that entire portion of community whose esteem I, or any sensible man, cares for. W.W. Downer.”

On May 5, 1882, Carrie hosted a reception in Oswego for 20 people. The Oswego Morning Express reported that, “Miss Downer is about twenty-one years of age, possesses an appearance of honest candor, and is not highly educated. She is what is known as a trance medium, and when under the influence of certain spirits, as she claims, will deliver scientific addresses, and beautiful poems. Last evening, under the influence of A.R. Wallace the compeer of Darwin, she delivered a most interesting lecture, of which evolution was the subject. She delineated the theory of evolution, tracing life from infinitesimal atoms to the highest forms of human existence, and the still further developed spirit life. She employed many scientific terms, and the production was superior to any impromptu effort by a person well versed in the theory.”

“Someone in the audience desired to hear from Longfellow, and he kindly responded through the medium of Miss Downer. He thanked them for calling for him, and then proceeded to compare his earthly existence to his spiritual. This was also couched in the choicest language, and was a most charming address. Miss Downer next passed under the influence of Edgar A. Poe, and delivered two poems which were identical with Poe’s style, but were of entirely new composition and considerable length. These feats were performed in a well lighted room, and Miss Downer declares that she knows nothing of what she says, either before or after the trance, she also speaks very rapidly. These exhibitions are certainly remarkable, and we do not know that they have any strictly scientific explanation.”

Carrie last appeared in public on April 1, 1888, at spiritualism’s 40th anniversary party. One hundred and fifty people packed the Odd Fellows’ Hall in Syracuse to hear her speak. According to one local paper, “Miss Downer wore a dark dress and an earnest expression. When the inspiration took her, she closed her eyes, trembled perceptibly, and spoke rapidly but distinctly….Modern spiritualism came into the world, she said, with the spirit rappings for which the Fox sisters became celebrated at Rochester in 1848….Without spiritualism humanity is struggling and groping in the dark….Some people laugh at it, but they show their own ignorance and bigotry.”

“The worshippers were then requested to write on slips of paper subjects on which Miss Downer’s poetical friends in the undiscovered country could exercise their talents….Miss Downer fell into a trance and out of her mouth proceeded poetry. The poets who were responsible for the poetry were not natural, but they very able versifiers, not afraid to handle such subjects as Humanity, The Power of Love, and Immortality.”

Carrie continued to promote spiritualism throughout upstate New York until she left for California, where she met and married Colonel Thomas J. Stone in 1890. She had one daughter, Lenora Downer Stone Glass, and lived in San Jose until her death on May 22, 1918. According to Teresa Downer, whose husband Bruce is a descendant, “Carrie Downer was known…for her channeling of Edgar Allan Poe, most specifically, ‘The Raven.’ Each time Bruce and I went on a genealogy trek, we would always have ravens that would guide us to find our sought-after ancestors in the cemeteries. I have always thought that it was Carrie guiding us.”

Bob and Cherry DiCaprio live at 19 Downer St. today. According to Bob, “We were told that the house has its own ghost, but a benevolent one. Previous residents claim to have seen the ghost of a lady in a green dress. She went around tucking the kids into bed at night. Is she the ghost of Carrie Downer? I don’t know. Personally, I’ve never seen her. But, occasionally I see a movement of light or shadow out of the corner of my eye, and it makes me wonder.”

Looking Backward will appear in the Messenger every other week, as long as there are stories to tell. If you have questions about this story or suggestions for future ones, including any local historical images or information, please contact me via e-mail at bvillehistory@earthlink.net.

Carrie Eliza Downer. Born in Baldwinsville on April 18, 1854, she was the fourth and youngest child of Willard Hosmer and Jane Smith Downer, with whom she made her home at what is now 19 Downer St. Throughout the 1880s, Carrie lectured about spiritualism and when under the spell of trances, would 'channel' detailed theories of evolution by Darwin, along with known and unknown works of poetry by Bryant, Longfellow and Poe. She married Colonel T.J. Stone in 1890 in California and died there on May 22, 1918.