This is unique, the recipient added into the front of their copy of Sir Arthur Conan Doyle Case For Spirit Photography which through time has reached a loving home with us. 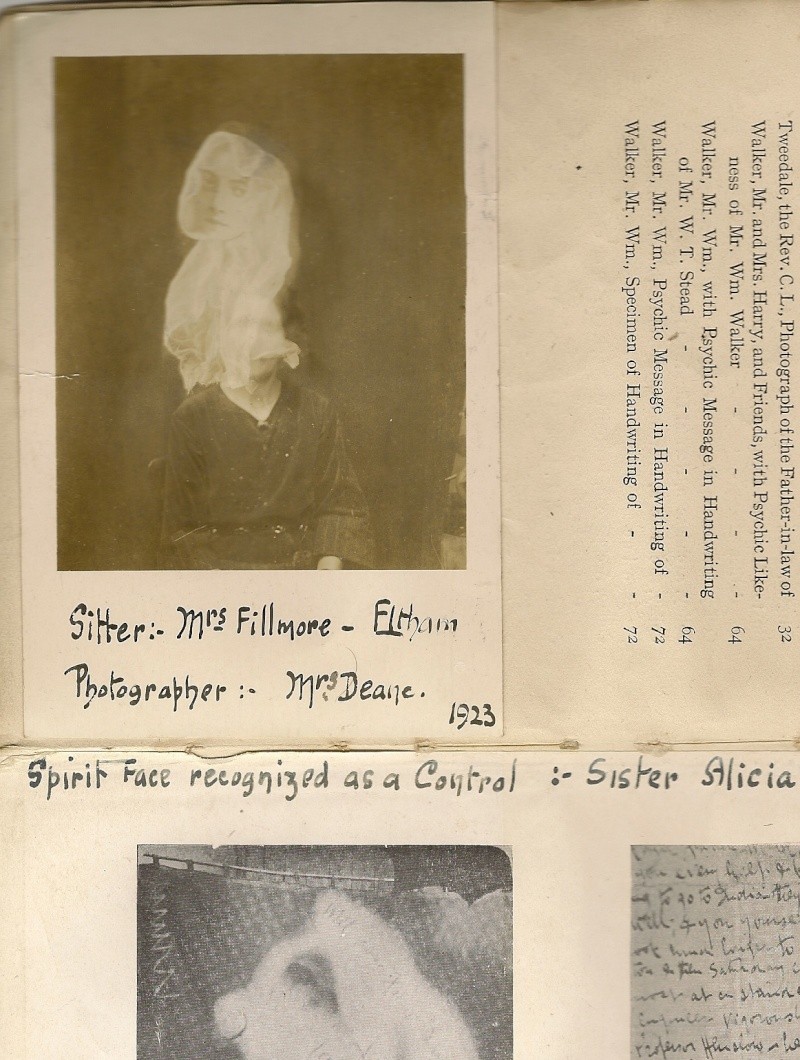 It truly is interesting, thanks for sharing it.

See the picture of ADA's posted in Spirit Photographs

The ghost picture from the 1923 armistice 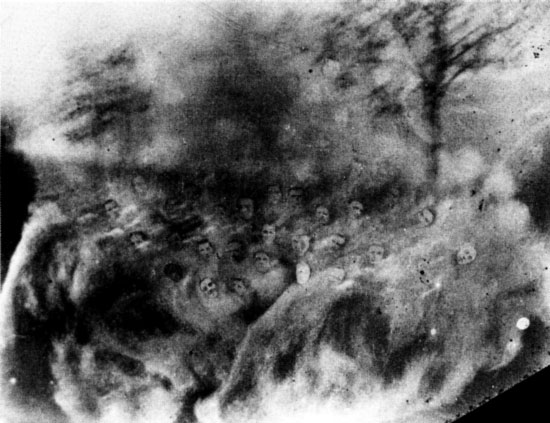 Subsequently the Daily Sketch published an article claiming fraud because the faces were those of famous sporting people. 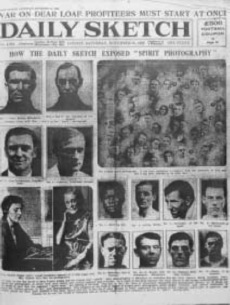 This was rejected by Ada and her supporters, including Conan Doyle because it was impossible to truly say the faces matched and that had it been faked Ada would never have used famous faces to do so.

The 1922 Armistice Photos
Before Spirit arrive 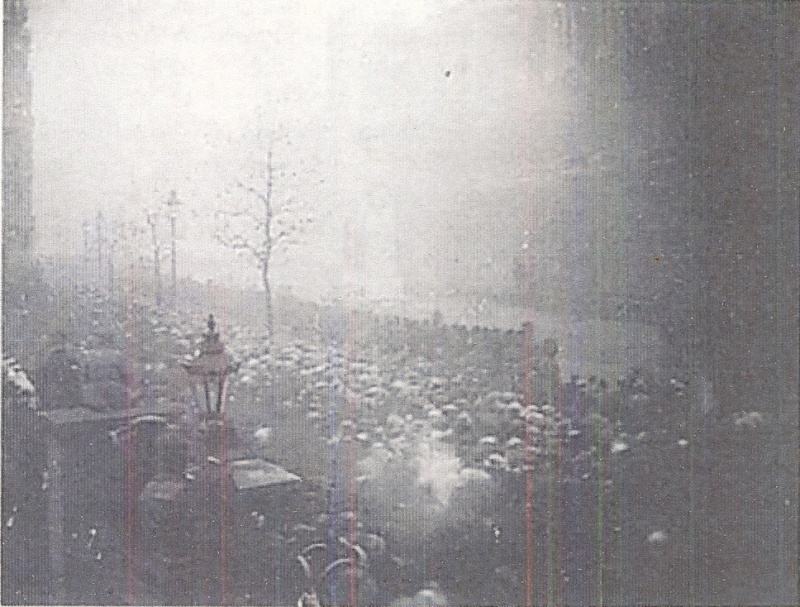 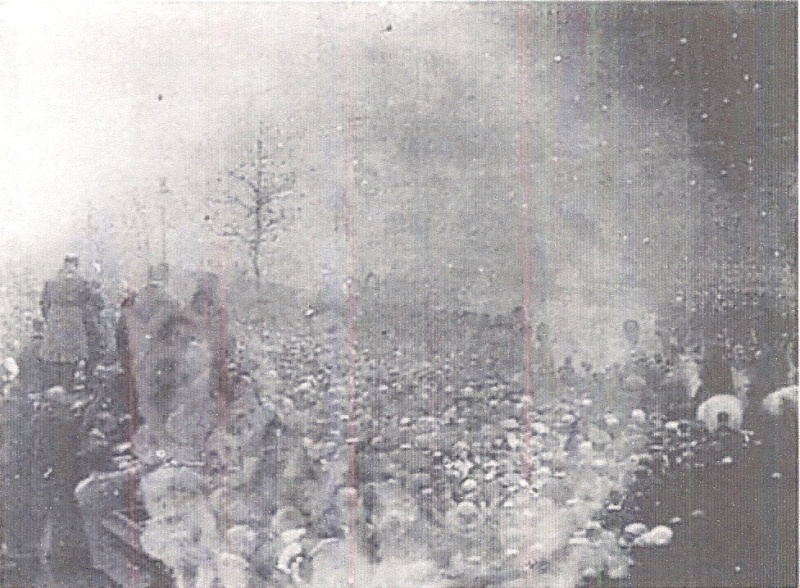 From Conan Doyle's "The Case For Spirit Photography" Copy purchased by William Neale Eltham SE for two shillings and sixpence about 1922
CHAPTER 6
THE ATTACK ON MRS. DEANE .And MR. VEARNCOMBE

I took up my pen for the purpose of considering the case of the Crewe Circle and urging the folly of discarding seventeen years on the score of a single case. I cannot, however, end my task without saying a few words as to the attack upon Mrs. Deane and Mr. Vearncombe, two other puotographic mediums. This attack hardly deserves attention as it was anonymous, but it was brought out under the auspices of the Magic Circle, a society of conjurors who have been interesting themselves in matters psychic. As the two attacks were issued simultaneously they seem to have had some common inspiration , and to have formed a general assault upon the whole position of psychic photography. The same individual, Mr. Seymour, theamateur conjuror took part, I understand, in both transactions.
Mrs. Deane the person attacked, is a somewhat pathetic and forlorn figure among all these clever tricksters.She is a little, elderly charwoman, a humble white mouse of a person, with her sad face, her frayed gloves, and her little handbag which excites the worstS suspicions in the minds of her critics. Her powers were discovered in the first instance by chance. When she first pursued the subject, her circumstances were such that her only darkroom was under the kitchen table with clothes pinned round it. None the less, she produced 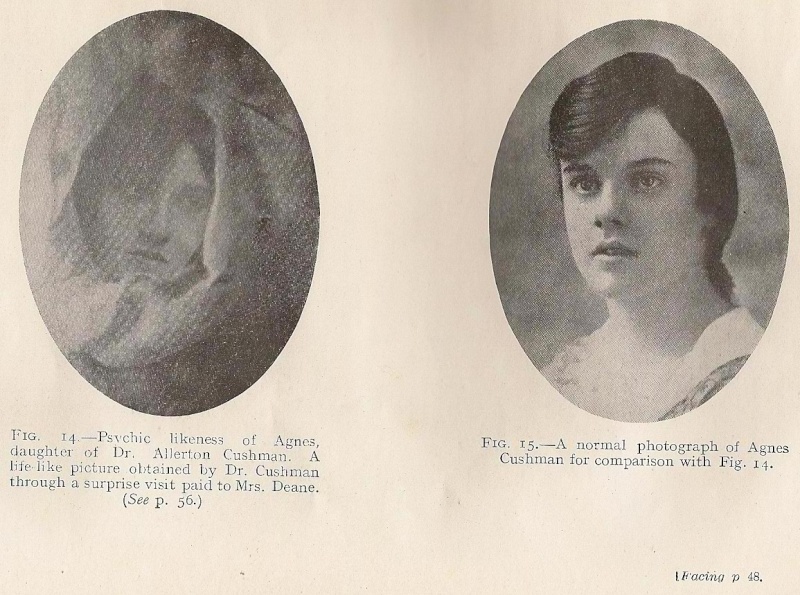 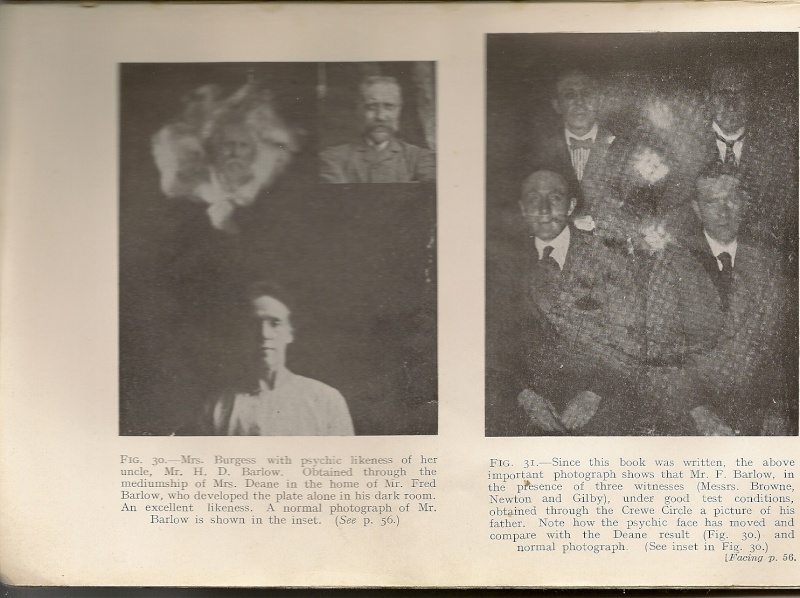 Thanks for printing that interesting extract, Jim.

Thank you for sharing that nice article. I did attend the workshop by Lionel Owen and found it to be quite interesting, his collection of photographs was amazing, mainly pictures from the Crewe Circle. He told us the pictures were checked by the National Museum of Photography for any sign of being faked, all passed their inspection. He also had some pictures that are in the book "Faces of the Living Dead" book by Martyn Jolly.

Thanks, yes the majority of the book is about Hope and the Crewe circle. I am pleased that their are some very substantive pieces of information like the picture of Agnes shown here. Without that I sometimes feel that Sir Arthur could be a little accepting of things as with the problems he encountered over the Cottingley Fairies. I will put something up on here about that when I get the chance.

Of Course in the days of Spirit of PN I wrote an article about her The pictures are, by and large in the preceding posts.

Though apparently having many psychic experiences as a child, it was not until Ada Emma Deane was fifty-eight years old that her career as a photographic medium began. After becoming involved with Spiritualism, she was encouraged by a North London medium to develop her psychic powers and in June 1920 obtained her first psychic photograph.

Initially her work was regarded as controversial because she apparently needed to hold the unexposed photographic plates to “magnetise” them. Some researchers felt that this was an opening for fraud, a view reflected in the American Journal of The Society for Psychical Research (ASPR), Vol 15 1921 p.364, suggesting that “control of the experiments is … so unsatisfactory that at present it is impossible to arrive at any conclusions of value”. A later ASPR Journal, however, took a different view, being more supportive of her work, according to Sir Arthur Conan Doyle in his review in Volume 2 of the History of Spiritualism. Doyle relates how Dr Allerton Cushman, Director of the National Laboratories at Washington USA, upon a surprise visit made to the British College of Psychical Science, in July 1921, received a photograph with the image of his deceased daughter.

The same year Ada commenced the first of her series of Armistice Day photographs that brought her great notoriety. These were taken at the Cenotaph in London in November 1921, 1922, 1923 and 1924.

The 1922 pictures received widespread coverage in the press.


Ada Deane Armistice picture from 1922, taken just before the 11th hour of the 11th day


Ada Deane Armistice picture from 1922, taken at the exact moment of Armistice in which the ‘spirit extras’ appeared

The 1923 photo is notable for the fact that H. Dennis Bradley, having received a communication from his brother-in-law in spirit to do so, found what he believed to be his face in the picture. The story is related in Bradley’s 1924 book Towards the Stars.

The 1923 picture drew controversy with the Daily Sketch claiming that the faces were those of famous sports stars indicating the picture was a fraud. This was strongly denied by Ada Deane’s supporters, especially Sir Arthur Conan Doyle.

In her 1925 booklet, Faces of the Living Dead, Estelle Stead published letters written to the editor of the Daily Sketch. These stated that the greatest authority on “anthropametic” matters, Sir Arthur Keith, had decided that the faces in the photograph were in no way identical to those published by the newspaper.

Ada Deane was subjected to considerable investigation. Whilst investigators such as Hereward Carrington were prepared to accept that something was happening, others continued to think it was pure fraud. Yet most of those who decided upon the negative view did so just because she held the plates for a while before use. However, when several investigators substituted their own plates without Mrs Deane’s knowledge they obtained results including all of the phenomena usually associated with her work.

As Martyn Jolly notes in Faces of the Living Dead (2006), Ada Deane became “one of Britain’s busiest photographic mediums, holding over 2,000 sittings, many of which were for ordinary people. “ One good example of this, in our personal library, is a photo taken in 1923 showing a Mrs Fillmore, of Eltham, with a spirit extra recognised by the sitter as her control, ‘Sister Alicia.’

Similar topics
» The Cenotaph, Alfred Rosenberg, Ada Emma Deane and the Ghost
» The Seven Principles a discussion on their creation
» Spirit Photo.
» Oscar Wilde "A Ghostly Discussion"
» Mediumship or what?