Interesting and well known way to project a ghostly image, 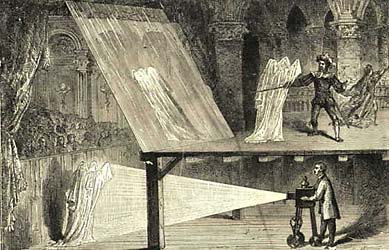 The trick is called Pepper's Ghost after John Henry Pepper, a professor at London's Royal Polytechnic Institution, the man who first used it in a stage performance in 1863. On a smaller scale it was originally created by his friend Dircks but despite Pepper's best efforts the name stuck.