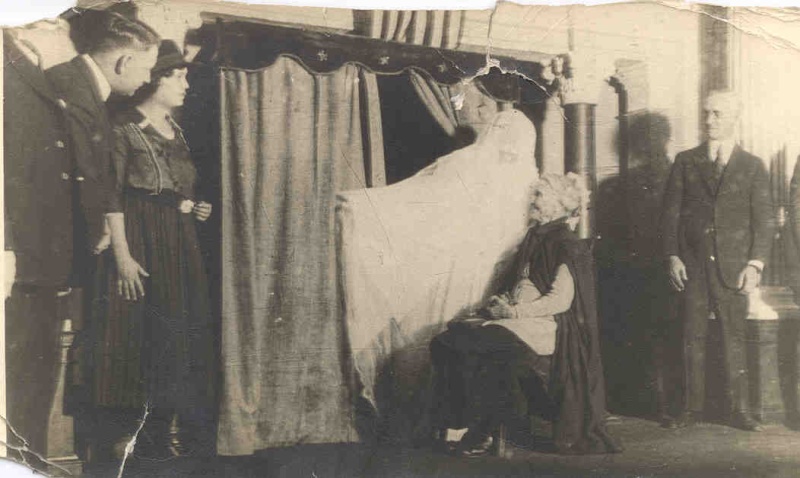 Seated is spiritual medium Elizabeth Allen Tomson. To the right is Clarence Tomson, husband and spokesman of the medium. The young woman to the left is their daughter Miss Nourhalma Tomson. This photo was taken in 1920.
I discovered this in the files at
http://library.pittstate.edu/spcoll/ndxhamlin.html#seance2
These are the papers of Irving Hamlin. Hewas born in 1873. The date of his death is currently unknown. He was an avid researcher of the paranormal, traveling frequently to participate in seances. It is clear he fequently visited Tomson who was one of his research subjects. He also kept up correspondence with the American Society of Psychic Research and with the Crandons.

I can find little more about Hamlin or Tomson except she gets her own comment (unpleasant as expected) by Randi
"In 1922, Scientific American offered two $2,500 awards, one for the first person who could produce an authentic spirit photograph under test conditions and the other for the first medium to produce an authentic "visible psychic manifestation" (Christopher 1975: 180). Houdini, the foremost magician of the period, was a member of the investigating committee. Nobody won the prizes. The first to announce she was ready to be tested was Elizabeth Allen Tomson, but after she was caught with twenty yards of gauze taped to her groin, flowers under her breasts, and a snake in her arm pit, she was never formally tested (Christopher 1975: 188)."