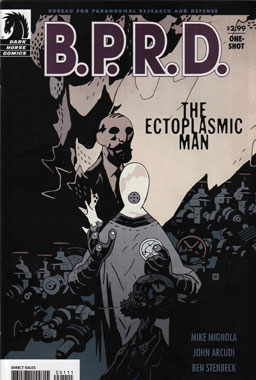 "This is essentially the origin story of Johann Kraus, the Bureau for Paranormal Research and Defense's resident disembodied medium. Back in 2002, the story goes, he was leading a seance, assumed an ectoplasmic form to commune with the spirit world, and inadvertantly became part of a global supernatural disaster that destroyed thousands of spirits -- the psychic feedback killed Kraus' body and the other participants in the seance, but left Kraus as a bodiless ectoplasmic spirit. But soon, he discovers a new menace in a nearby cemetery, a demon that feeds on the souls of the recently deceased. But how can an intangible ghost stop such a powerful demon? "

Now don't say we didn't warn all would be Physical mediums