I just found this one too, well I'll leave you to decide on its validity


WASHINGTON, DC – The economic recovery plan put forward by the Obama administration includes an initiative to employ as many as five hundred psychics.

Those selected for the program will be given jobs ranging from intelligence gathering to subsidized private practice.

“We need to put people to work, to harness the talents of all Americans towards a common purpose,” said the President in a press conference. “That includes factory workers, bakers, bankers, artists, and yes, it also includes people with paranormal ability.”

Asked if the psychics would be involved in counterterrorism or other military applications, the President declined to comment.

However, several prominent Washington insiders, speaking on condition of anonymity, have indicated that psychics are already deployed in strategic locations throughout the Middle East.

“The troop surge in Afghanistan was the result of a particularly convincing séance,” said one source. “The psychic guessed Obama’s age, weight, and occupation, then predicted the 50% deployment increase just by reading his palm.”

The source added, “After that, the tea leaves were enough to convince everyone that we need psychics to win the war on terror.”


PSYCHICS WORKING ON AN IRAQI BATTLEFIELD 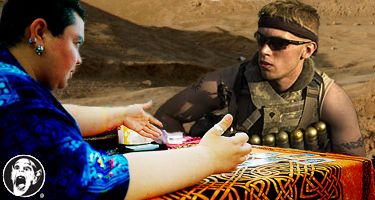 Similar topics
» Spiritualist Rescue Work
» A Small Case of Rescue Work.
» Psychics Is Mr. Right, Really the One?
» Tell us what you think of Psychics Sun UK
» Day 2 of the Sun newspaper on Psychics