By THE EDITOR
A new machine for which many claims are made was shown to me the other day by Murdo MacDonald-Bayne, the Principal of the College of Universal Science in Australia, who is now in this country.


For many years Mr. MacDonald-Bayne has been sitting with Charles Bailey, the well-known Australian medium. In their circle they have obtained the direct voice and the trumpet voice. All the directions for the manufacture of this new machine, called the "Chastaphone," were given from the Other Side five months ago by a spirit claiming to be St. Anthony of Alexandria, of the second century.


This machine has been tried out successfully on at least fifty occasions. All kinds of spirit voices have been registered, voices speaking in French, Dutch, Chinese, German, Hindoo and, of course, English.


Evidence of survival has been given again and again, and often the tones of the voices have been clearly recognised.


REDUCES VIBRATIONS
The "Chastaphone" is a small wooden box, wired inside with a special kind of German wire, which is sensitive to vibrations.


It is claimed for this machine that it reduces the vibrations used by spirit people, which are normally high ones, to a range of 30,000 to 32,000 vibrations per second, which is the range that the ear can hear.


On two occasions, Mr. MacDonald-Bayne told me, Charles Bailey's voice has been heard at the same time as two spirit voices were registered through the machine, the spirit voices carrying on a conversation of their own.


This machine has been constructed with the collaboration of the engineering department of one of the universities in Australia.


When an attachment is placed in water it is claimed that the vibrations of even metal and flowers and plants can be distinctly heard.


The "Chastaphone" not only works in conjunction with Bailey's mediumship, but was tried with a young lad named McCarthney in Sydney. When this youth first sat, whisperings were heard, but at subsequent sittings the voices became more and more distinct, and gave evidences of survival.


Mr. MacDonald-Bayne has discovered as a result of constant sittings that he can be used as an instrument for healing, and he says he has had some extraordinary cures in Australia. He does not touch the patient at all. He merely stands by.


He contends he has proved that life is not resident in the physical body, but in the spiritual one. In cases of disease, if the life force can be stimulatd into making contact again with the nerve forces of the body, then astonishing cures can be obtained.


EXTRAORDINARY HEALING
He gave me instances, one of an old lady, aged eighty-four, suffering from paralysis in the lower limbs, who was carried on to the platform, and after a few moments without any contact by him found her legs began to move. Also a young girl paralysed in her legs, and arms, who was unable to speak, but who spoke and moved in a few moments.


It is obvious that the spirit world is trying to find new methods of communication and new avenues of contact with this world of ours.


Mr. MacDonald-Bayne told me that Swaffer's name and address were given to him through the machine by one of the spirits who spoke regularly, as were also those of the editors of two Spiritualist journals in this country.


I am going to try the "Chastaphone." Charles Bailey is coming here in November and I have been promised the first sitting with him in this country.


If it is satisfactory, arrangements will be made for Spiritualists generally to participate at his seances. Meanwhile I am trying to arrange with other mediums who obtain the voice to have the "Chastaphone" at their seances and see what results are obtained.


BAILEY'S MEDIUMSHIP
It is hoped, when Bailey comes over, to arrange for Dr. Quentin McLennan, who, when on earth, was a distinguished Glasgow surgeon, to address the Royal College of Surgeons in Glasgow through the "Chastaphone."


It is Bailey, of course, whose apport mediumship has for many years been known to psychical researchers in Australasia. Once, he was fined by the Customs for having in his possession articles which they claimed must have been imported! Actually, they had suddenly arrived, as though from nowhere, in the seance-room.


Bailey sits every night in Sydney, often with scientists. Here, his guides will not allow him to sit more than four times a week."

I remember reading a book by Murdo MacDonald-Bayne, when I first became interested in Spiritualism, about materialisations in the open air (Tibet I think). I have never seen the book since - does anyone know the title?

The book I was looking for is called: "Beyond The Himalayas"

“From that time on I was directed step by step to the great Himalayas in Tibet; and there in the hidden recesses of the majestic snow-clad mountains where the atmosphere is so clear and the vibrations so pure that heaven opens on to the earth, in that glorious state where heaven and earth are as one, I was instructed what to do and where to go.

During my sojourn there I witnessed spiritual manifestations so wonderful that words utterly fail to describe them. Later I will present to the world, in book form details of these happenings---what I saw and heard, also my travels and experiences, with descriptions of the way to the most inaccessible parts of the Great Tibetan Himalayas.

I shall also reveal the joys and ecstasy of meeting daily with the Masters, whose love, sympathy and simplicity is the secret of their mighty Power. For Love is God and God is Love. ‘For He so loved the world that He sent His only begotten Son, that they who hearken unto Him will find eternal immortality.’

When the Soul is ready the Master appears, and those who are ready will hear and know the Master’s voice proclaiming all nations one nation, all peoples one people, all life one Life; one Tree with many branches, but the same Life in all: One in all and all in One.

“I, myself, make no claim; I am just a voice in the wilderness calling to the sons and daughters of God to hearken unto the Truth.

For this I was told I was born.”

Another rather ecentric and interesting Aussie who was regularly reported in th e1930's in Psychic News. I was fascinated in reading about him to discover Charles Bailey was still active in the 1930's 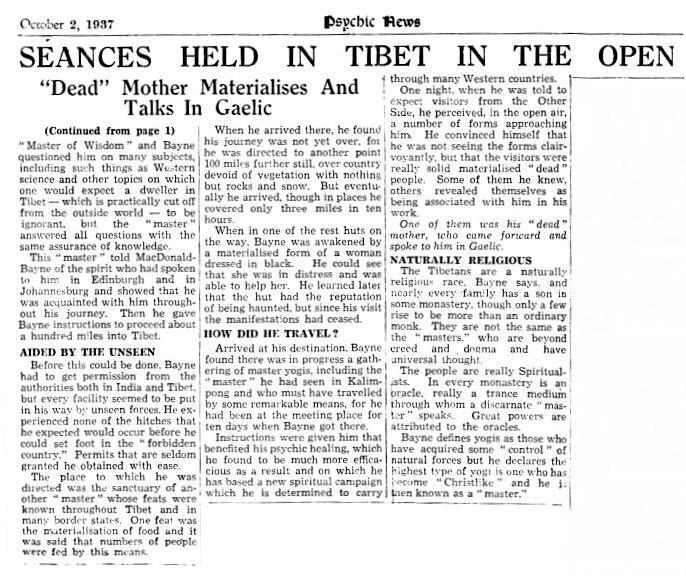 Thank you, Jim. Your research is impeccable.