In the earliest days a lot of research involved itself in the natural energy field around us all. This followed on from early research by Dr. Carl (Karl) Ludwig von Reichenbach who was a notable chemist, geologist, metallurgist, naturalist, industrialist and philosopher, and a member of the prestigious Prussian Academy of Sciences. Influenced by the works of Franz Anton Mesmer he worked on a number of primarily psychosomatic disorders and hypothesised that the conditions could be affected by environmental electromagnetism. However, finally his investigations, in around 1848, led him to propose a new imponderable force allied to magnetism, which he thought was an emanation from most substances, a kind of "life principle" which permeates and connects all living things. To this vitalist manifestation he gave the name Odic force or OD. This is very much the precursor of all the latest theories of the etheric energy field and concepts of the human aura.

Remember mesmer had proposed that Hypnotism was a form of Animal Magnetism and hypnotism was used to induce trance in some mediums (notably Andrew Jackson Davis in his early career). This was a time of great experimentation with the telegraph appearing and an explosion of knowledge in electricity and radiation.

Not suprising then that people tried to measure and prove this energy effect. The French lead the way and this effort by Dr Paul Joire is a beauty.

"The "sthenometer" is an instrument I have made in order to demonstrate the presence of a force emanating from the nervous system, and to measure this force.
It is sufficient to bring the hand near to the apparatus in order to see the needle move in proportion to the force projected.
This force, which emates from the human body, appears to be the same as the force projected from mediums, which has hitherto been so difficult to demonstrate and study.
A point of special interest to medical men is that this force is found to be modified in various maladies of the nervous system. The observation of these modifications will be of very great utility for the diagnosis, prognosis, and treatment of these illnesses.
We read in the Journal des Practiciens "M. Joire has demonstrated that neither sound, heat, light, nor electricity can explain this displacement of' the needle, which always moves three or four minutes after the hand is brought close to it. ".
"These experiments have been repeated by M. Joire before the Society d' Hypnologie et de 'Psychologie, at Dr. Berillon's" Institut Psych-Pysiologique, in M. Huchard's department at Necker. The results were shown to be quite conclusive.
"Consequently, it is proved that there emanates from the human body something of which we are ignorant, and which is perhaps capable of producing luminous phenomena; and more certainly the displacement of a light body at a distance.
The following are the different observations we have been able to furnish with regard to this force by the use of the sthenometer.
When the hand is brought close to the apparatus with the fingers extended, opposite to the point of the needle and perpendicularly to its direction, we notice, after a few moments, a movement of the needle, generally towards the hand.
This movement takes place slowly, progressively and in a very characteristic manner, different from the agitation of the needle by shaking the apparatus.
The movement of the needle is sufficiently considerable to dispel all, possibility of illusion. It is not a displacement of a few degrees only but is often observed to the extent of 20, 30 and 40 degrees. . '
If the displacement obtained with each hand successively is observed, we notice that that obtained with the right hand is normally greater than that obtained with the left hand.
The amplitude of the displacement of the needle varies with the individuals, and particularly with the condition of health.
We have noticed in some subjects, but in rare circumstances a displacement of the needle in the opposite direction - that is to say, a repulsion.

From Hereward Carrington The Story of Psychic Science upon this area

Published around 1930
EX'I'ERIORIZATION OF MOTIVI'I'Y AND SENSIBILITY
These terms the reader may have surmised, are to designate the alleged projection, beyond the periphery of the body, of motor and sensory powers. They are of French origin, and were employed by Col. Albert de Rochas, in his two well-known books, L'Exteriorization de la Motricite Sensibitie and L'Exteriorization de la Sensibilitie . In the former case, the motor nervous current is projected outwards, into space, moving objects and affecting matter; while in the latter case the sensory impulse seems to start at some point outside the body, and travel inwards, -so that pain may be felt, for example when some point in space is pricked with a pin, an inch or more from the bodily surface itself.
The evidence for the former of these depends largely upon telekinetic phenomena, and his book was based upon experiments with the famous medium Eusapia Palladino, and others. Here, there is very good evidence that some sort of 'motivity', of the kind exists, for it is certain that some form of energy is radiated from the body, moving matter or affecting instruments devised for its registration. As to the movement of matter, there is am enormous amount of evidence in its favour. As to the instruments for its registration, there is still much dispute as to their efficacy. A large number of French experimenters have devised apparatus of this sort: The' Dynamoscope' of Dr. Collongues, and his later 'Bioscope'; the 'Magnetometer' of the Abbe Fortin; the 'Galvanometer' of M. de Puyfontaine ; the 'Biometer' of Dr. Baraduc; the 'Sthenometer' of Dr. Paul Joire ; the apparatus devised by M. Thore; the 'fluid motors' of Count de Tromelin; etc., being examples of these. The apparatus devised by Sir William Crookes, for testing the medium D. D. Home, might also be placed in this class. Numerous experiments have been tried with these instruments, many of them apparently successful; but it seems probable that not enough allowance was made for air currents, thermal radiations, etc., in many instances. To take Joire's Sthenometer, by way of example; heat and air-currents are two very important factors here'. The latter are, of course, eliminated by the glass shade placed over the, straw-indicator, but the heat of the hand must still be considered. Joire, it is true, contends that a hot iron held close to the instrument does not affect it as the human hand does, and he has obtained results through thick quilting, etc. However, his results are still disputed. Only a long series of experiments, in which all possible normal sources of error have been eliminated, would settle the question one way or the other. Certain it is that many of the results which have been obtained are most difficult to account for by any normal means.

Concerning the second question-exteriorization of sensibility-there is still greater uncertainty, many investigators contending that the results so far obtained might be explained by means of suggestion, Others believe that they are due to the 'aura' of the body, etc. We need not discuss this question further, however, in view of the general state of uncertainty as to the validity of these experiments" 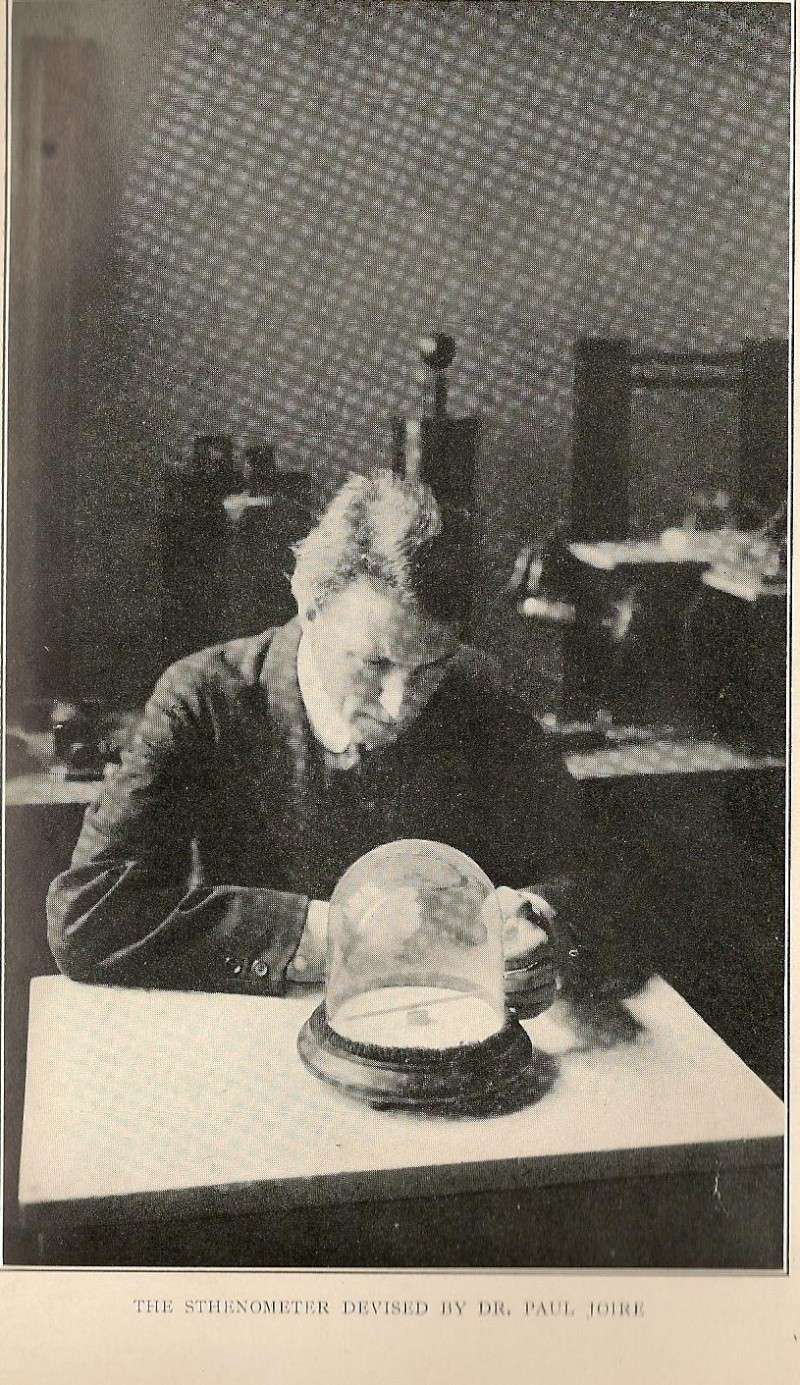 Seems there was a lot happening around 1848!

Researchers in those days seem to have carried out far more experimentation - what a contrast to the present day.