I quite like this report in the Toronto Star

Of course this Guardian Report Disagrees


The research paper involved is at

and it is downloadable

Lets just put this in perspective with Australia's Numbers 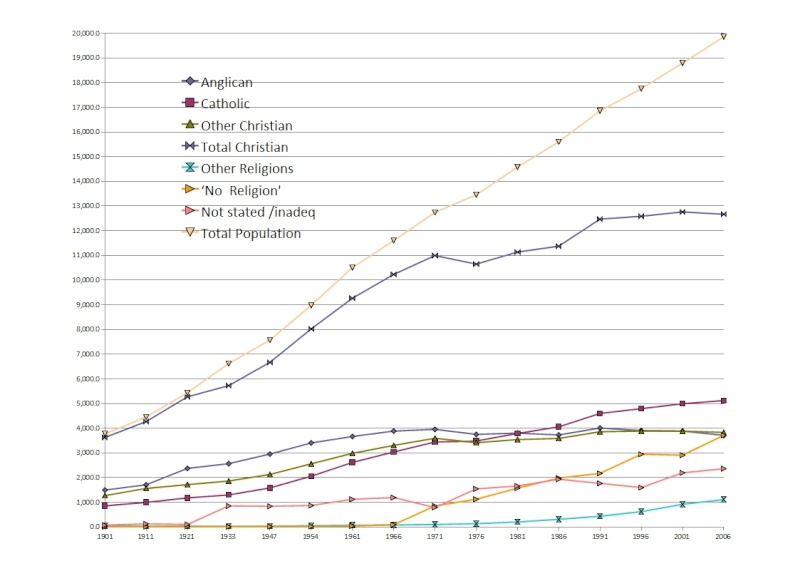 The way the Christian Religion has stopped growing against the rapid population rise shows up. Note the fast growth of No Religion plus Other Religions mainly Muslim. In Number terms only the Catholics are growing among the Christians 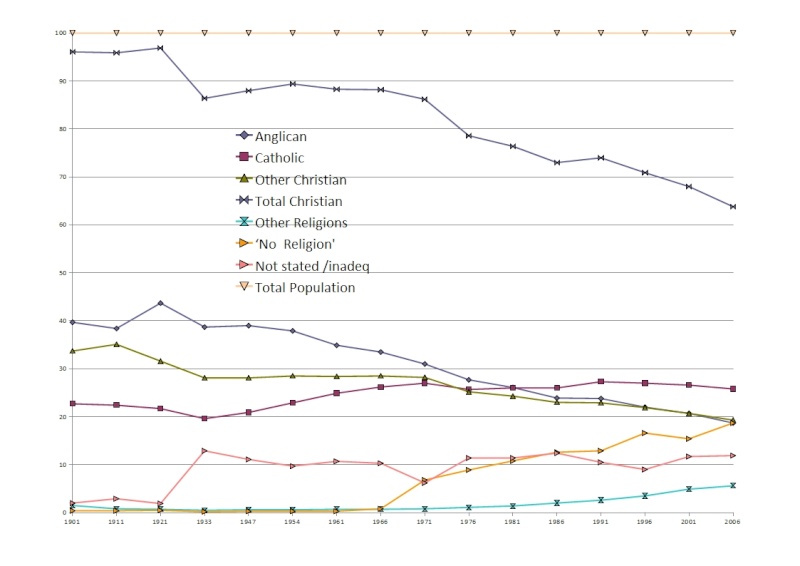 Apart from minimal growth in Not Stated or Inadequately Described only "no religion" and "other religion" are growing. In other religion is obviously Muslim, Sikh and Buddhism. However in the minor participants Spiritualism grew by about 23% whereas New Age/Wiccan/Pagan By about 300%.

Looking at the rate of Growth in No Religion compared to the fall in traditional Christian you can see how these numbers arise.

Sadly even lumped in together with all other modern alternatives (i.e Pagan/Wiccan/New Age) Theosophy and Swedenborg we make a small smudge on the very bottom of the graph. It puts into perspective the new age claims of a world of enlightened people bringing about ascension by changing the planetry energies. I am excluding the even smaller body of satanists thinking they may be unwilling to assist enlightenment.

Hope I am putting this in the right place. In the last few decades people have been taught to think of themselves more and more as time passes. You can see that is very strong today. I can see why some portions of the new age would attract more people than spiritualism would. Todays world is all about me me.

Another thing is that children today are hardly taught to read anymore. I am shocked at the standard of education my grandchildren have. I talked to one of them and told her that the education standards are dropping and all she could tell me that was her teacher told her that she was very smart. With that kind of attitude many children have I dont see them sitting down and reading about spiritualism or anything for that matter. It is even possible spiritualism will drop unless it gets out verbably. My son sat down and read a book to his son (most unlikely to even continue thinking about this stuff) on spiritualism and reincarnation and he became a believer. Mind you, he has a long ways to go with the peer pressure he faces.

Another thing is that I believe the more people leave structured religion churches the better chances for them to turn to spirituality. Just a few years ago I would have never read any of the stuff of mediums and such. I considered it a forbidden subject even though I believed in Universalism that all will be saved through Jesus with no one left behind. To bring it up on forums where people believe in Universalism you would be mocked and called an unbeliever (even tho they believe all is saved) which I found surprising.

Another thing I found out in Universalism that the more the people stayed together, they started to form organizations and then started the rules of this and that, that should of never been.

If spiritualism grew really fast would the same happen to that belief. Would there be doctrines put on it.

But we all do hope for spiritualism to grow at a faster pace.

I have experienced an SNU Church where the committee blatantly used the donated money as a personal bank account. I blew the whistle on them which brought major upheaval, hatred and all sorts of opprobrium and an 'official' SNU local enquiry. Their remit was to gloss over and keep the peace, but not look at causes.

This proved as corrupt as the folk being 'examined'.
My view - then and now - is that a person is either honest or they are not, part-time honesty doesn't exist, nor is 'honesty' restricted to material matters.
What is so often overlooked is the efferct of the law of Attraction and I'd suggest that this is why Spiritualism is foundering. It begins and ends with the 'me'.
I could give many other examples of where platform spiel is just that. THe Mediums of yesteryear were far more likely to LIVE the ism. Those I knew were of the highest calibre as people.

Thanks for your thoughtful post, Kahlon I will reply when my computer behaves properly.

The Quakers were major supporters of The Fox Sisters, just read about the Post Family.

In honesty Spiritualism was an out growth of Non Conformist Christanity. However, what a movement it was in the early days.