SpiritualismLink :: Special Areas of Interest beyond the Spiritualist Philosophy :: Allan Kardec and The Spiritists

From http://www.ssbaltimore.org/Newsletter/2007/SpiritistNewsSEP-OCT07.pdf
AMALIA DOMINGO SOLER
The poetess of the violets 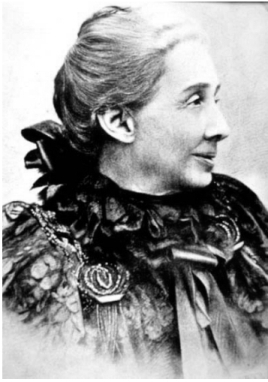 One of the most significant figures in the Spiritist movement is Amalia Domingo Soler. Not only for her
immense work spreading Spiritism, but mostly because of her vivid example of abnegation, charity and love.

Amalia was born in Seville, Spain on November 10th, 1835, right after the great Empire of Spain collapsed due
the civil war known as “Carlistas Wars”. At that time, Spain went through difficult times, especially poverty and diseases. In this historic frame, Amalia had plenty of tribulations during her childhood. Before she was born, her father left for a long trip and never came back. Then, at eight, she became blind. After medical treatment, she recovered her vision, though with recurrent problems during all her life.

Amalia had a strong and loving relationship with her mother who took care of Amalia with great devotion. She wanted to see Amalia well educated, despite her vision problem. When Amalia was two years old, her mother started teaching her to read. At five, Amalia learned to read with fluency. At ten, she started writing poetry, and eight years later, she published her first verses. However, at twenty five, Amalia Soler suffered a great emotional shock when her mother passes away.

After her mother’s death, Amalia started the most difficult phase of her life. Single, without money and family, she only had two options: either stay in a catholic convent or get married with a wealthy man. Her strong and independent spirit could not accept either of those options. So, she moved to Madrid, capital of Spain. In Madrid, she worked as a seamstress, while writing poetry. But, that was not enough to survive. She had to ask for charitable contributions. At that time, she felt lost and sick. Her spirit was in darkness and desperation. One night, she thought of killing herself and, suddenly, she saw her mother.

That spirit phenomena made such an impression on Amalia that she sought for spiritual comfort in religion. There, she rediscovered Jesus’ love and faith.

As time passed by, her vision problems got worse. While seeing a doctor, he talked to her about Spiritism. It was when Amalia got interested on it. She read everything she could found about Spiritism. She got engaged in Spiritism in such a way that she started writing Spiritist articles. Her first Spiritist articles were written and published in the newspaper “The Revelation” (La Revelación, Alicante, Spain) and in the magazine “The Criterion” (El Criterio) in 1872.

Amalia became popular in the Spiritist movement on March 31st 1875 when she read her poem “To the memory of Allan Kardec” during the celebration of the Anniversary of Spiritism. She became famous for her writing gift and her true commitment with the Spiritist movement. On May 22nd, 1879, she founded the Spiritist magazine “The Light of the Future” (La Luz del Porvenir), remaining as its editor-in-chief for ten years.

Her Spiritist friends from the city of Alicante offered her help. They want her to work as a medium full time, but she, as a
conscientious Spiritist, kindly refused the offer, knowing of the inadequacies of such proposal. The poetess continued working during the day and mediumistically writing in the evenings. She worked in collaboration with discrete mediums
(Maria, Eudaldo and Miguel Vives) through whom she received the beautiful messages of Father German, her Spirit-mentor. She wrote several books and more than 1,286 articles. Her most popular books are “Memories of a Woman”, “Facts that prove”, “I forgive you”, “Her most beautiful writing”, “Spiritist Tales”, “Memories of Father German” (recently
published in English), “Bouquet of violets”, “and The greatest virtues”.

Amalia returned to the spiritual realm on April 29th 1909. Since then, several mediums have already received her messages, one of them being Divaldo Franco, the renowned Brazilian Spiritist medium. Amalia Soler’s work has great influence in the Spiritist movement, especially in the Hispanic countries. May Amalia’s lifelong examples inspire us as well!
- Alba N. Morales
BIBLIOGRAPHY
- The Spirits Review in Spanish. Number 1. Oct-Nov-Dec 2003.
International Spirits Council. Carlos Alberto Iglesia.
- Alcaraz, Jose Aniorte. Collection The Light by Amalia Domingo
Soler. The Light of the Path Sprits Center. Orihuela (Alicante),
Spain. 2006.

SpiritualismLink :: Special Areas of Interest beyond the Spiritualist Philosophy :: Allan Kardec and The Spiritists